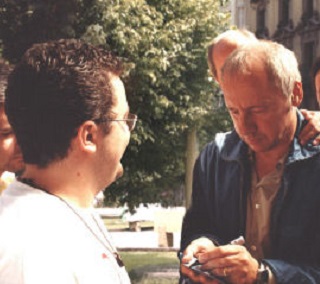 I met Mark Knopfler the very same day his Sailing to Philadelphia CD was released. I had the luck (thanks Javierote) to be invited to an interview MK gave at Cadena 100 Radio and after that we heard that MK
was in the Hotel Villareal. We went there and after a nice chat with Mr Paul Crockford he told us that MK would come out to sign autographs and have photos taken.. It was a really good having him so close, interacting with us. Apart from myslelf, behind MK is my very good friend Manuel, Mr Crockford, and behind me Mr Luis Anido.

Back to Your Turn