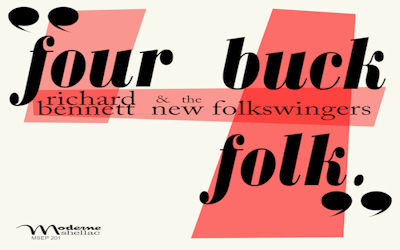 Richard Bennett has released a new EP – Four Buck Folk . Well, to be more precise it’s Richard Bennett and the New Folkswingers ! Here’s what Richard has to say:

“Four bucks – there’s not much you can purchase for four bucks these days.  Four bucks is the new two bits… that’s 25¢ for those too young for a shave and a haircut.  What about it?

On completing the Ballads In Otherness record I threw myself straight back to writing and into the studio again to begin a new album; a very different record from the others.  I quickly recorded and mixed four tunes with an eye to what may follow.  Then again, these may end up on the cutting room floor when it’s all said and done but the thing is, I’m really pleased with how they turned out, how they sound and how these four tunes hang together as a piece.  For the sessions I gathered the usual bunch of mates and musicians as well as some new friends and a few old compadres.  Altogether they make up The New Folkswingers and we’re so excited about this folk flavoured project that Moderne Shellac decided to release an E.P.

These four tunes will be available exclusively through CD Baby as a download only….no hard copies, CDs or vinyl, no streaming and not accessible through other formats or services.