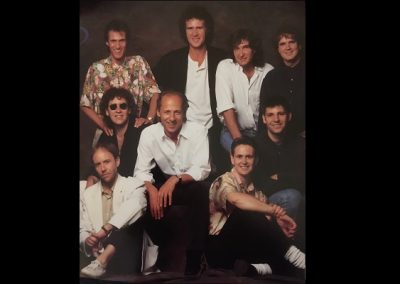 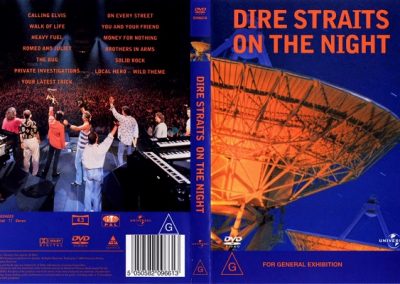 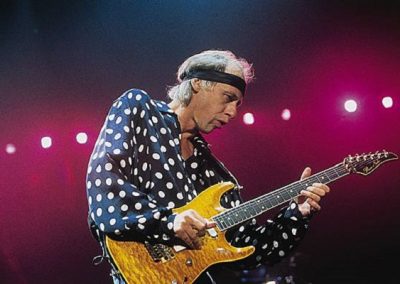 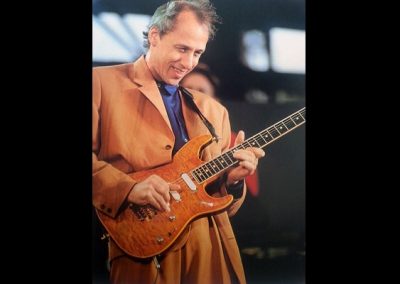 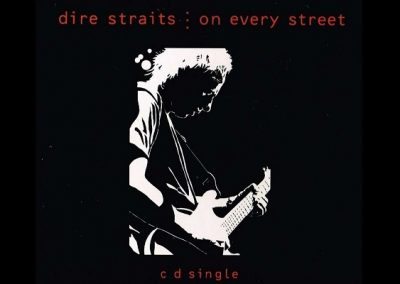 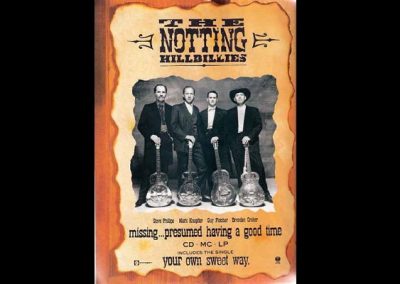 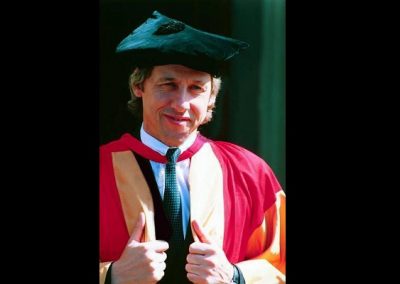 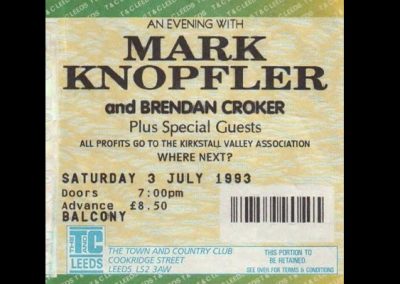 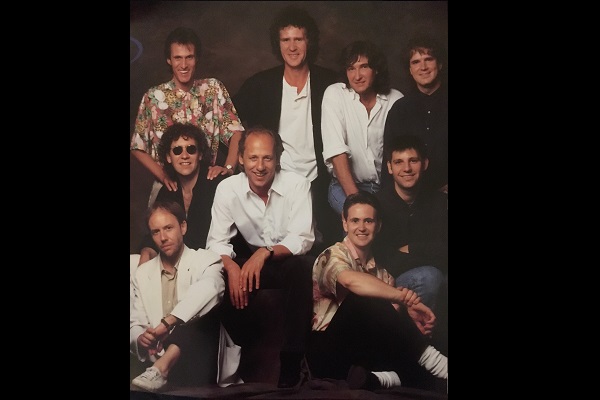 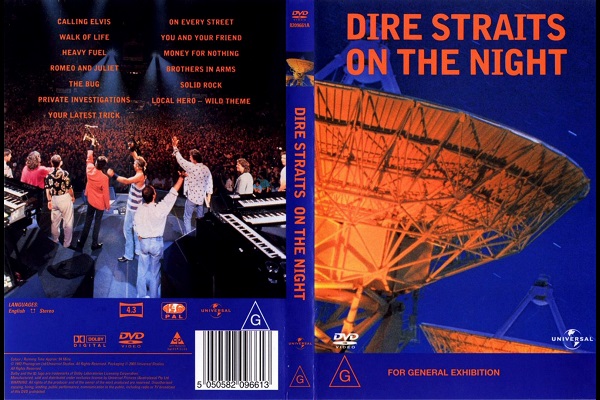 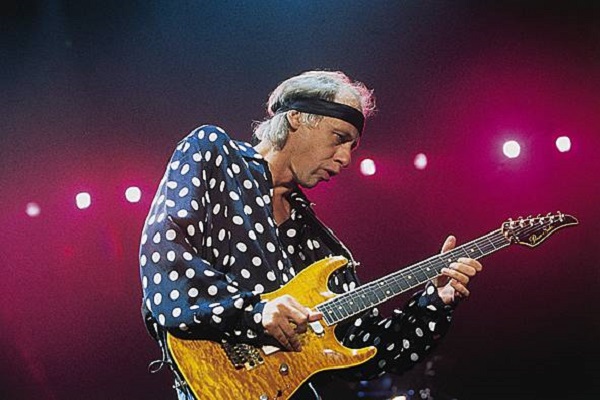 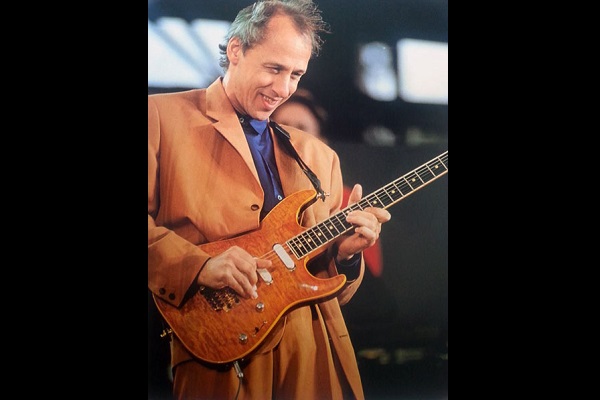 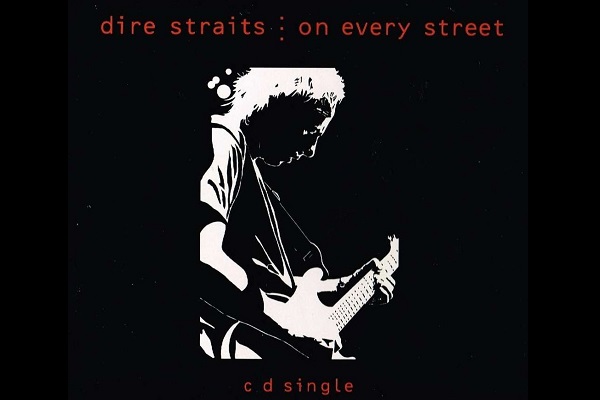 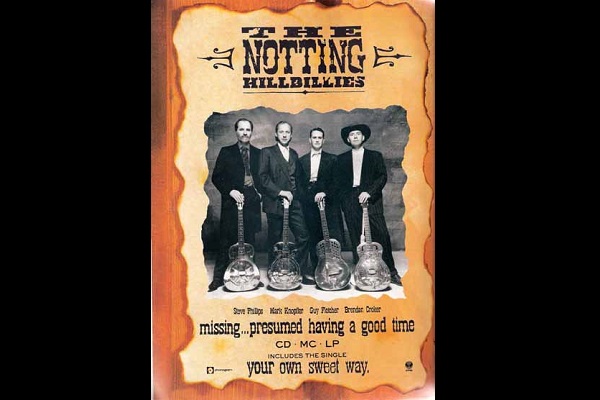 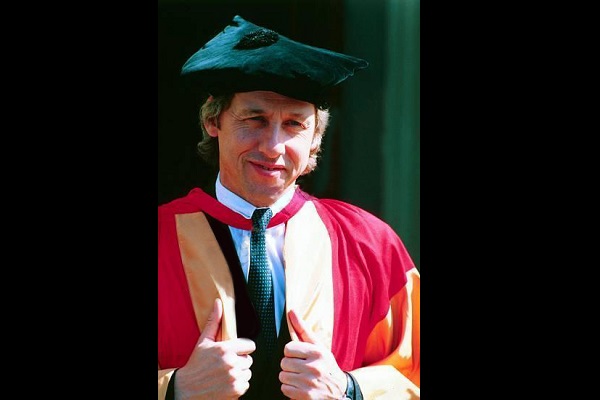 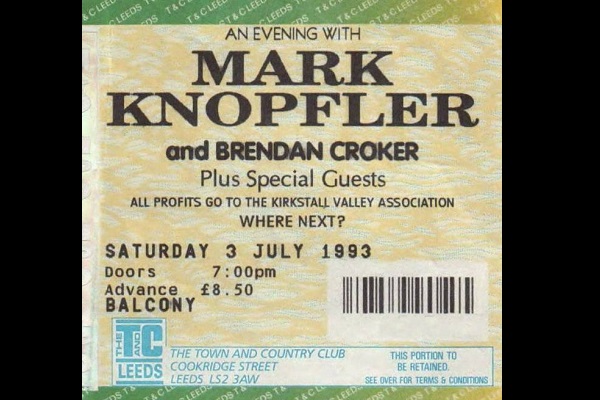 Early February 1990, Mark, Steve, Brendan and bassist Marcus Cliffe, play the first ever Notting Hillbillies gig when they perform a short set at the Lyric Theatre, Hammersmith, London. Compered by actor Richard Gere, the show is a fund-raising event on behalf of Amnesty International. Among those on the bill are Dawn French and Jennifer Saunders: Mark is talked into appearing on their TV show.

From mid-February, the ‘Billies commence six weeks of rehearsals at Nomis in preparation for the first Notting Hillbillies tour. On the 3rd of March, the ‘Billies perform Bewildered, Setting Me Up and The Next Time I’m In Town, live at the Paramount Theatre, London, for BBC TV’s The Late Show UK. On leaving the venue the band is forced to make hasty retreat back into the building where they remain for several hours sheltering from Poll Tax riots. The Paramount Theatre performances are broadcast on the 28th of March. The ‘Billies one and only album, Missing …. Presumed Having a Good Time, was released on the 3rd of March. In mid-March, BBC Radio 2’s Wally Whyton’s Country Show features acoustic numbers by the band. On the 2nd of April, the ‘Billies play acoustic numbers on Radio London’s Mary Costello Show and commence a 43 day, 41 gig tour of Britain (plus an extra gig thrown in at the Mean Fiddler, London). Paul Franklin, pedal-steel, joins the band. Mark appears on the French and Saunders TV show along with Lemmy, David Gilmour and Ralph McTell, all taking part in a spoof on Bert Weedon’s famous Play in a Day guitar tuition book. In the wake of the Lockerbie air disaster, on the 24th of April the Notting Hillbillies play an unscheduled, low key show at the Rex Cinema, Lockerbie. The 500 tickets available are an immediate sell out. On the 15th of May, Channel 4’s Rock Steady broadcasts live coverage of the Notting Hillbillies gig at The Maltings, Snape. Mark, Alan and John, join Eric Clapton, Ray Cooper, Steve Ferrone and Phil Palmer, on the 30th of June, to play Money For Nothing, I Think I Love You Too Much and Solid Rock, at the Knebworth Park Festival, a 12-hour concert held to raise money for the Nordoff-Robbins Foundation. Mark Knopfler Backstage, an interview with Mark and Randy Newman , is broadcast around the same time and 1990 also sees Mark providing backing vocals and playing guitar on Jeff Healey’s cover of Mark’s I Think I Love You Too Much on his Hell To Pay album. The Mark Knopfler-Chet Atkins Neck and Neck album is released reaching #29 in the UK album charts and #1 in the UK Country Music Chart. Poor Boy Blues and The Next Time I’m In Town are released as singles. In November, recording begins at Air Studios, London, of On Every Street which will turn out to be Dire Straits’ final studio album.

In January 1991, Mark plays the guitar solo on the Voices That Care single. Calling Elvis and Heavy Fuel are issued as singles together with the Calling Elvis music video. In August, the On Every Street tour commences at The Point, Dublin. With Mark, John, Alan and Guy, officially designated as Dire Straits, the line-up also includes Chris White (sax), Paul Franklin (pedal Steel), Phil Palmer (guitar), Danny Cummings (percussion) and Chris Whitten (drums). Following Rod Stewart, Dire Straits become the second act to perform at the newly opened Sheffield Arena. During the Saturday, 31st August, show members of the audience were given tickets to attend the Arena the following Monday daytime for the filming of the video for the Heavy Fuel single. From one five night sell out to another at Birmingham’s NEC during which, on the 9th of September, the On Every Street album is released. By the 21st, it’s #1 in the UK album charts. On the 23rd, Veronica TV in Netherlands hold a music auction in which the red jacket worn by Mark during the Alchemy concerts is among the lots on offer. Mark wins ‘Best Country Instrumental Performance’ for So Soft, Your Goodbye with Chet Atkins and a Grammy for ‘Best Country Vocal Collaboration’ with Chet Atkins for Poor Boy Blues. He also plays guitar on Where Is The Next Train Coming From on Buddy Guy’s Damn Right I Got The Blues album and is featured on six out-takes on Dylan’s The Bootleg Series Volumes 1–3 (Rare & Unreleased) 1961–1991. Charlie Gillett issues an album of tracks which includes the 1977 Sultans of Swing demo he played on his Honky Tonk radio show.

On Every Street, The Bug and You and Your Friend are released as singles in 1992. The On Every Street tour continues and after a show at the Maple Leaf Gardens in Toronto in March 1992, a special after-show dinner of sausage and mash is prepared. However, when the band turn up to tuck-in all the bangers have mysteriously disappeared. In August, Mark, Brendan Croker and Alan Clark, play on Rory Block’s Ain’t I A Woman album with Mark playing guitar on a track called Faithless World. John Anderson releases his Seminole Wind album which includes Mark’s When It Comes to You with Mark on guitar. Mark and Chet Atkins are nominated for ‘Best Country Instrumental Performance’ for the Neck and Neck album. The last single from the On Every Street album, Your Latest Trick (live) raises funds for London’s Great Ormond Street Children’s Hospital. The On Every Street tour concludes in Zaragosa, Spain, on the 9th of October 1992. It will be the final Dire Straits tour.

On the 8th of May 1993, Mark was conferred with the Honorary Degree of Doctor of Music by Newcastle University. Later that month the final Dire Straits live album, On The Night, was released and peaked at #4 in the UK album charts. Also released at this time was the Encores EP to be followed by Mark’s Screenplaying soundtrack/film score compilation album. In July, Mark plays his new Beltona Resonator guitar at the Town & Country Club in Leeds when he, Brendan and Steve, play a benefit on behalf of the Kirkstall Valley Association. Mark had been presented with the secretly made Steve Evans resonator guitar by the other band members at the end of the On Every Street tour. On the 6th, the Notting Hillbillies, with Alan Clark on keyboards, opened the ‘Swan Hunter Benefit Concert’ at Newcastle’s City Hall. A number of fans miss the band’s performance as they didn’t realise the ‘Billies would be the opening act. In September, Veronica TV in Netherlands held another music auction. Among the items for auction is a signed headband worn by Mark during the On Every Street tour. Also in 1993 Mark played on Wonderful Land a track on Hank Marvin’s Heartbeat album.

Mark remained as busy as ever during 1994. He played on Don’t Forget About Me, a track on Nanci Griffith’s Flyer album, played on Around The Bend on Chet Atkins’s Grammy winning Read My Licks album and played guitar and sang background vocals on a remake of George Jones’s first number one country hit from 1959, White Lightnin’, on Jones’s Bradley Barn Sessions. Irish Boy was released as a single and Ticket To Heaven issued as a limited edition single. In May, Mark joined with the Royal Scots Dragoon Guards to perform Going Home at Edinburgh’s Usher Hall and in June Mark’s My Claim To Fame – later to be released as a bonus track – was featured in Channel 4’s documentary on Tyneside’s Swan Hunter Shipyard. On the 3rd of July, the ‘Billies played a charity gig at London’s Grosvenor House Hotel. In October, Mark received an award for The Bug at the 14th ASCAP Awards held at London’s Park Lane Hotel.

In 1995, Mark was conferred with the Honorary Degree of Doctor of Music by Leeds University. He was featured on Lily of the West a track on The Chieftains‘s album Long Black Veil. In June, the Dire Straits Live at the BBC CD was released. Mark was Vince Gill’s guest at the Country Music Awards in Nashville in October. While he was in Nashville, the UK’s Carlton TV Company interviewed Mark during the filming of their programme, Clive James Goes Country. With the ’96ers as backing band, Mark produces a Clive James demo single. Mark contributes guitar and vocals on Shootin’ for the Moon and Creole Angel on Sonny Landreth’s South of 1-10 album and plays guitar on Jimmy Nail’s Big River hit single. Issued in September 1995, Golden Heart is Mark’s first solo artist single and in November he wins Spain’s prestigious ONDAS Award for ‘Best International Act’ and gives the first performance of the single at the presentation gala in Barcelona. Darling Pretty becomes the first single of Mark’s career as a solo artist.