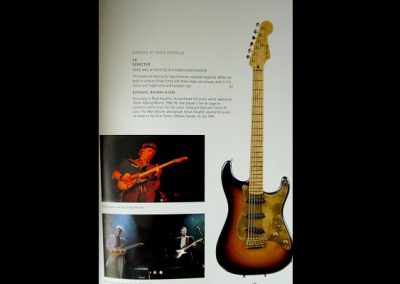 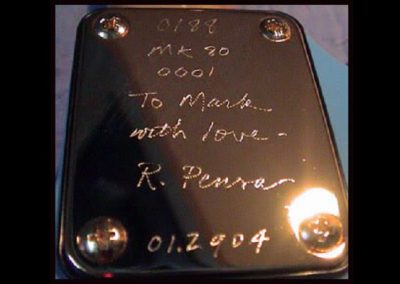 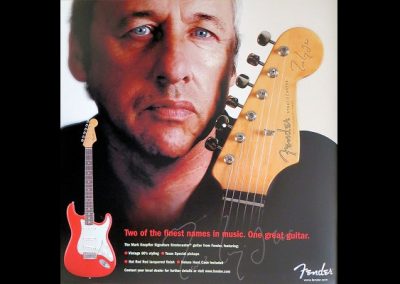 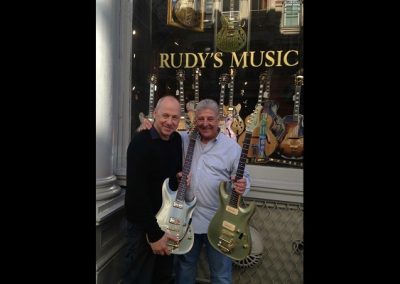 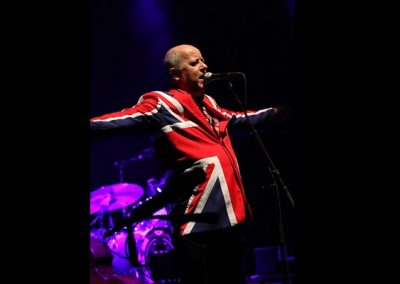 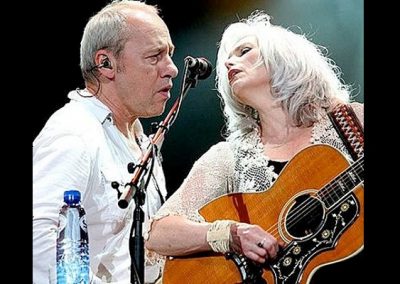 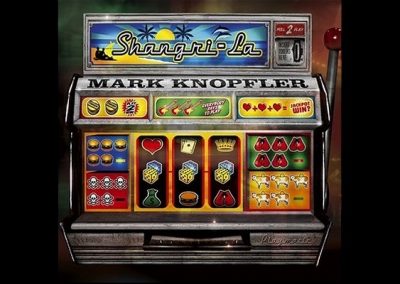 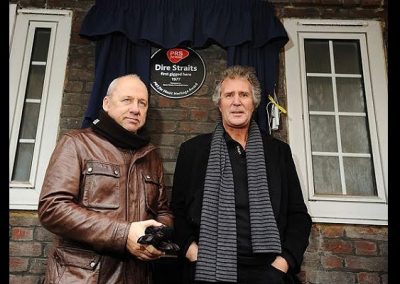 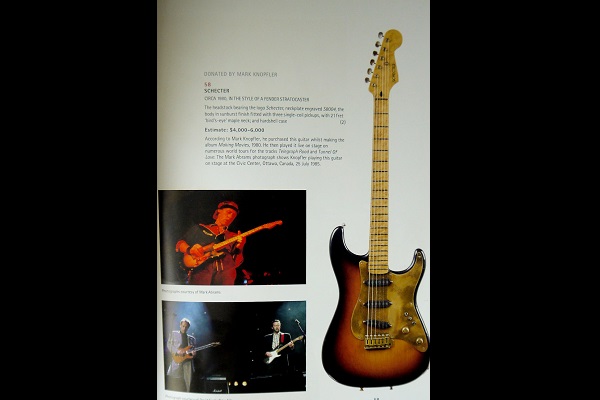 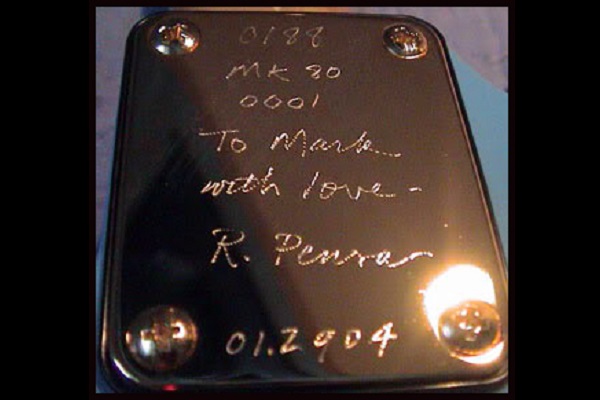 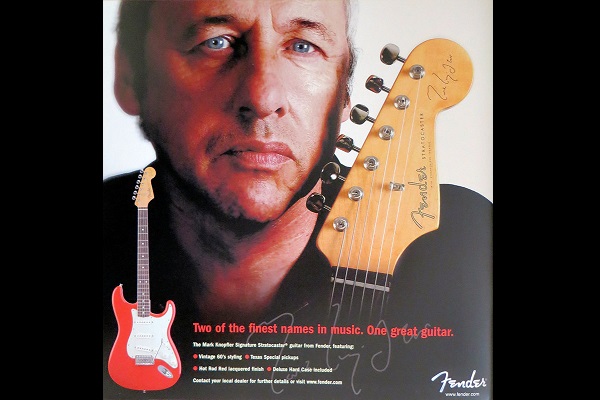 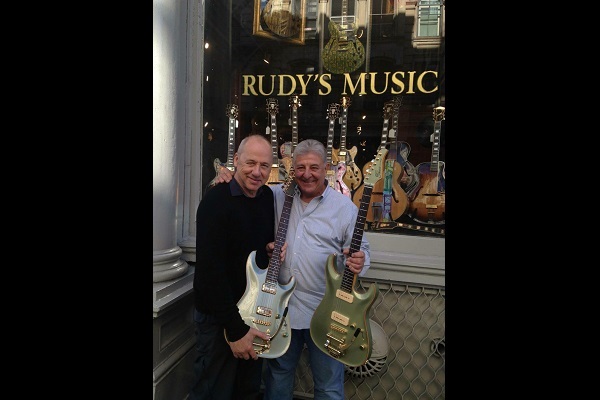 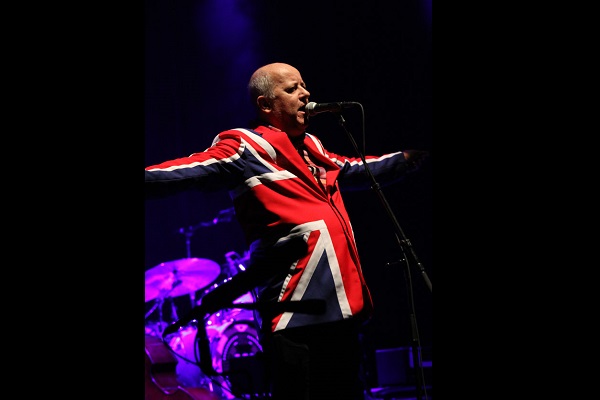 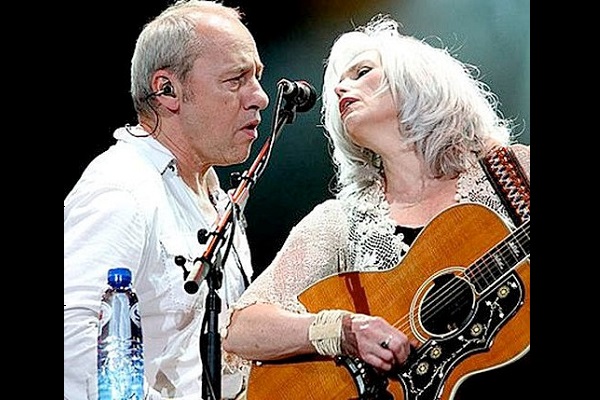 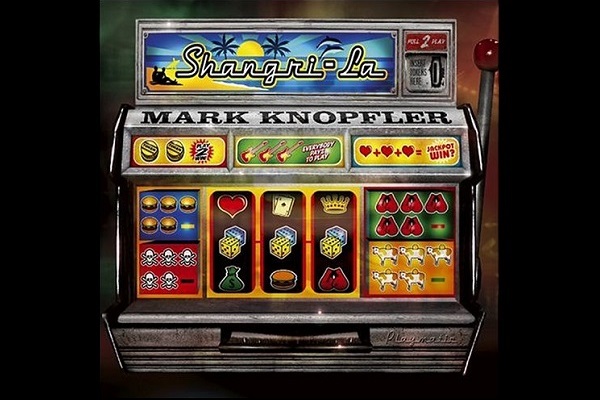 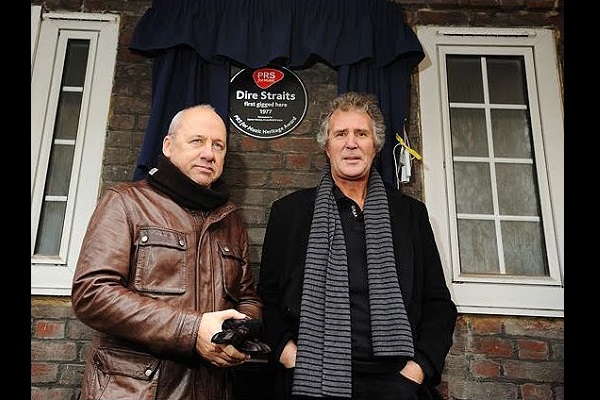 Fender issue the Mark Knopfler Signature Stratocaster which becomes the fastest selling Fender signature model and is considered to be one of the best of the non-Custom Shop Strats. In February, the Royal Scots Dragoon Guards album, Parallel Tracks, includes a cover of Mark’s Going Home. On the 6th of March, Mark was presented with Holland’s Edison ‘Lifetime Achievement Award’. Tragedy struck when on the 3rd of March, 2003, Mark was seriously injured in a motor cycle accident. He issued the following message to concerned fans:

I’d like to take this opportunity to thank the hundreds of people who have sent messages from all over the world – reading them is making me feel so much better so much faster. I’m mending pretty well. It’s stopped hurting when I laugh, although I felt it when I sneezed the other day. It made me realize how much I laugh. Thankfully I’ve only sneezed once since the accident, so I hope I don’t catch a cold. The only damage has been to bones (collarbone, shoulder blade and seven ribs) and to my bike. My right lung got a bit compressed with the impact and the swelling, so I’ll be walking a lot to help get it back up to normal. My hands are absolutely fine and I can’t wait to play my guitar again. Also, I’d like to thank everyone involved in my medical care – everybody, doctors, nursing and ambulance staff, has been fantastic, and Kitty has been a great nurse, too.

Due to start in Lisbon, Portugal, on the 22nd of April, the Ragpicker’s Dream Tour was cancelled as were charity appearances with Eric Clapton. In 2004, the DVD version of the live Dire Straits, On The Night was released. Mark receives a new Pensa Custom guitar, a Daphne Blue MK80, presented to him by Rudy. The guitar neckplate, numbered #0001, is engraved “To Mark with love, R. Pensa” and is the only MK80 with a triple zero serial number. Mark plays Disappearing Nightly on Bill Wyman’s Rhythm Kings‘s Just For A Thrill album in April and in June he donates his tobacco sunburst Schecter Strat to Eric Clapton’s Crossroads Guitar Auction held at Christies, New York, on the 24th of June, 2004. It sold at just over $50,000. Mark and Joe Brown perform Darling Corey and Donegan’s Gone at the Lonnie Donegan ‘Rock Island Line’ Tribute Show at the Royal Albert Hall. September sees the release of the Shangri-La album. Mark is featured on Nobody’s Here Anymore on John Fogerty’s Deja Vu All Over Again album. In October, Mark is in the USA where he and Richard Bennett perform on the Prairie Home Companion live radio show in St.Paul, Minneapolis. Mark also plays guitar on a track called An Droichead (The Bridge), Liam O’Flynn’s contribution to The Very Best of Celtic Christmas album. The Trawlerman’s Song and Boom, Like That are released as singles.

The Shangri-La tour commences on the 28th of February 2005 at Carnival City, Johannesburg, South Africa. The line-up for the tour is Mark, Guy, Chad Cromwell, Glenn Worf, Matt Rollings and Richard Bennett, but within weeks Chad is replaced by Danny Cummings. In May, Mercury Records release special SACD (Super Audio 5.1 surround sound CD) version of the Brothers In Arms album to commemorate the twentieth anniversary of its release. Rudy presents Mark with another MKII model which Mark uses for the first time in Milan on the 10th September. Mark plays on the title track of William Topley’s Sea Fever album and contributes a cover of Carl Adams’s All Over Again to the B.B. King & Friends 80 album. He also plays on Blue Moon of Kentucky and Baby, Let’s Play House, two of the tracks on the Scotty Moore Tribute album A Tribute to the King. The Private Investigations, Best of Mark Knopfler and Dire Straits album is issued in November and the Mark Knopfler-Emmylou Harris All The Roadrunning single is released. National Reso-Phonic guitars introduce the Mark Knopfler 14-fret Style O resonator guitar modelled on Mark’s original 1936 Style O. On the 4th of April the Royal Scots Dragoon Guards re-record their cover of Going Home at Olympic Studios, Mark’s guitar work is overdubbed onto the track on the 2nd of June.

On the 8th of February 2006 Mark wins a Grammy award for the ‘Best Surround Sound Album, Brothers In Arms 20th Anniversary Edition’. April sees the release of the All the Roadrunning CD with Emmylou Harris and the accompanying twenty-three date Europe and North America tour starts at the Forest National in Brussels, Belgium, on the 26th of May. In July, Martin guitars introduce a second Mark Knopfler signature acoustic guitar, the Mark Knopfler 000.40S “Ragpicker’s Dream”. The following month, Mark and co-driver Max Wakefield take part in the Le Mans 24-hour race in Mark’s 1954 Austin Healey 100S finishing in a respectable 9th place. Mark plays on Before The Bells, a track from Paul Burch’s East To West album and Tony Joe White’s Uncovered album includes a track by Mark, Not One Bad Thought. In September, Mark, Guy, Richard Bennett and Glenn Worf, play a benefit gig for the Boothbay Harbor Opera House, Maine, USA, and in October Jimmy Buffett’s album Take The Weather With You includes Mark’s Whoop De Doo. On the 19th of October, Mark was in Newcastle to be presented with a Silver Heart Award by the Variety Club of Great Britain (North-East). In November, Jools Holland’s Moving Out To The Country album featured Mark on You Win Again.

Mark and Emmylou Harris are nominated for ‘Best Contemporary Folk/Americana Album’ Grammy award in February 2007 for the All The Roadrunning album. In Germany, they are also nominated for the ‘International Pop/Rock Group of the Year’ Echo Award. In May, Mark re-records the Brothers in Arms single for the BBC in a one-take live session at London’s Abbey Road studios. Monies raised from the release of the track go to the South Atlantic Medal Association (SAMA) to assist with their programme of treatments for Falklands War veterans who continue to suffer the effects of Post Traumatic Stress Disorder (PTSD). In July, Mark is conferred with the Honorary Degree of Doctor of Music by Sunderland University. On the 10th of September, Mark played an intimate one-hour semi-acoustic gig at the Meistersaal, Berlin, Germany, showcasing songs from the forth-coming Kill To Get Crimson album which was released a few days later. The CD cover image is taken from a 1958 painting by John Bratby (1928-1992) called ‘Four Lambrettas and Three Portraits of Janet Churchman’ which Mark now proudly owns and displays at his British Grove Studios. Meanwhile, Mark and Guy collaborate to produce the music for a major US TV documentary, Seeing In The Dark. True Love Will Never Fade is released as a digital download single and was also available as a 7″ vinyl in the UK with a live version of Boom, Like That. In the USA and Canada there was a different single released, Punish The Monkey. Mark performed a second intimate Kill To Get Crimson showcase in London on the 5th of October before a select audience of around 80 people. The showcase was recorded for BBC Radio 2 and broadcast on the 19th of November. Also in November, a specially re-recorded Brothers In Arms single was released as a Remembrance Day edition. On the 12th of November, Mark performed a showcase in Basel which is filmed and issued as the Mark Knopfler AVO Session. The next day saw the release of the Real Live Roadrunning live DVD featuring the Mark Knopfler-Emmylou Harris gig held on the 28th of June, 2006, at the Gibson Ampitheater, Universal City, USA.

Turning to 2008, on the 29th of March the Kill To Get Crimson tour began at Amsterdam’s Heineken Music Hall. The line-up for the tour was Mark, Guy, Richard Bennett, Glenn Worf, Danny Cummings, Matt Rollings and John McCusker. Fans on the front row at the Royal Albert Hall gig on the 25th of May rolled out a banner saying ‘Happy Birthday Guy’. Mark strummed Happy Birthday on his guitar. In fact, Guy’s birthday had been the day before and this has led to bootlegs of the gig being wrongly dated. Mark plays National resonator on a track called Love Song on the The Dandy Warhols Earth album and he was among a number of the world’s greatest guitar players featured on Sonny Landreth’s From The Reach on which he played and provided vocals on the opening track, Blue Tarp Blues. Mark’s song, Coyote, from the Ragpicker’s Dream album, was included on the Save The Wolf compilation CD issued by the environmental group Green Warriors of Norway. In August, Mark was featured on the track I Always Get Lucky With You on George Jones’s duets album Burn Your Playhouse Down and in September he performed at Joe Brown’s 50th Anniversary Concert at London’s Royal Albert Hall. In Germany, Mark and Emmylou were nominated for the ‘International Pop/Rock Group of the Year’ Echo Award for All The Roadrunning and Mark was nominated for ‘Best International Pop/Rock Male Artist’ Echo Award, for Local Hero.

In February, 2009, Mark’s British Grove Studio wins the Music Producers Guild Award for ‘Best Studio’. In September, Border Reiver/Cleaning My Gun was released as a single and Mark performed a charity show on behalf of the Princes’ Trust at London’s Hurlingham Club. The event was filmed and issued in 2010 as the An Evening with Mark Knopfler DVD. On the 11th of September, the Get Lucky album was released and in November the second single from the album, Remembrance Day/Piper To The End, was issued. On Armistice Day, November 11th, shortly before 11 am, Mark performed Remembrance Day live in London’s Trafalgar Square. On the 3rd of December, Mark and John Illsley attended the unveiling of a PRS Music Heritage Award plaque at Ferrar House, Church St, Depford, the site of the first ever Dire Straits performance back in the summer of 1977.

At the beginning of 2010 Mark was featured on a track called Sarah on Jon Allen’s When The Morning Comes CD. The Get Lucky tour commenced on the 8th of April at the Moore Theater, Seattle, USA. Personnel for the North America leg was Mark, Guy, Danny Cummings, Richard Bennett, Glenn Worf, Matt Rollings, Tim O’Brien and Mike McGoldrick. Tim left the line-up for the European leg to be replaced by John McCusker. In May, remixed by Chuck Ainlay, Alchemy was released on DVD and made available in both 5.1 sound and Blue-Ray versions. At the end of July, Mark played on a track called The Highwayman on Jimmy Webb’s album Just Across The River. In October Mark was awarded the ‘APRS Sound Fellowship’ recognising his “significant contribution to the art, science or business of sound recording”, in November it was announced that Mark was to become Honorary Vice-President of the Tyne Theatre and Opera House Preservation Trust and, in December, Memories of My Trip, a CD from legendary British jazzman, Chris Barber, featured Mark on three tracks, Blues Stay Away From Me, Ragtime Piece and The Next Time I’m In Town.